Have you ever wondered how we ever only remember our life as a part of someone else’s?

I cannot recall my earliest memories without my middle sister featuring in them. Archana and me – my memory draws no distinction. She is six years older. When I was in class 4 she was in class 9. She bossed and bullied me as she pleased. She would catch me eating food from the canteen rather than eating the lunch my mom had packed and would threaten to tell my mother. She blackmailed me into submission. She would interrupt my class to ask for water from my bottle, much to my teachers’ chagrin. She would often grab me after my class and take me to hers where for her friends (older and cooler in my opinion) I, was the entertainment. Her friends fawned over me, I even recall one girl in particular who would stitch little dresses for my dolls. I basked in my sister’s reflected glory. Popular simply because I was Archie’s sister.

We set off every summer to visit our grandparents, a long train ride into the Indian heartland. The anticipation mounted with each passing train station. Archana and I would fight for the window seat and quarrel about the upper berth. My mother and my eldest sister Vandana, who is 11 years older and was always a grown-up, were the peace-keeping forces. Sharing our berth was our constant companion, a large red and white, Milton water-cooler with cold water and Glucose D to keep us hydrated. A red Walkman plugged in my ears. George Michael for company. Bored and happy in equal measure. The parched lands, the rolling hills, the sunsets, the inky blue night, the moonlight casting shadows on trees and the fireflies sparkling before our tired eyes. Little treats marked our progress. Belgaum’s Kunda, Orai’s Gulab Jamuns and Jhansi’s Pethas. From hippy, hedonistic Goa to conformist, conventional Kanpur. After nearly 24 hours of travel, we would arrive smelling of the Indian Railways. That unmistakable smell I can only describe as train-iron. As she stepped off the train, my mother would step out of my father’s shadow. We would see her in a new light in her old home. As girls raised in Goa, we were so obviously ‘western’ in Kanpur. We didn’t wear a salwar kameez or should I say salwar suit. We would refuse to wear a dupatta in Kanpur’s searing heat, but my cousin could never step out without one. My aunt would chide me about calling my sister by their names and not adding a Didi as a mark of respect. We were a constant source of amusement. One morning my mother chuckled when a neighbour remarked, “Neerja tumhari beti toh bilkul Russi hai” i.e “Your daughter is so Russian”. I’m quite certain it was less of a compliment and more of a judgement on my mother’s betrayal of Kanpur’s traditions. That jibe about my carefree nature stayed with me because I was after all Neerja’s daughter. 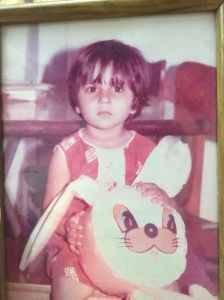 My father was always encouraging us to read and take-up new hobbies. However, he maintained that our studies always came first. Unfortunately for him, right through school, I didn’t. Perhaps my only talent was that I was chatty, confident and never shy to put on a show. Story-telling, dancing, elocution – I didn’t need a second invitation. I was a little less enthusiastic about equations, formulas and theorems. I recall one hot balmy afternoon in particular when my friend Nandini picked me up on her trusted two-wheeler Scooty. She lived quite far from us but friendships weren’t defined by convenience and kilometers. She wasn’t in ‘my side of town’ but she was in my corner when I decided to address a room full of scientists. The topic was water conservation. These were my father’s colleagues at the National Institute of Oceanography. When my father suggested I participate I gamely agreed, but on the condition that he couldn’t be in the audience. I came first. And what I remember most about this achievement was that the congratulations were for Mr. Bajpai’s daughter.

Daughter, sister, wife. Where’s the I in identity? By the time I was old enough to have that self-awareness to enjoy that individuality, there were already too many demands on my time. Work, family, friends, fitness and fun. And then I found out I was pregnant.

It was almost a year ago. I was in Sydney on a business trip and attributed the disorientation to the jet-lag. I shopped for winter-wear for my soon-to-be postponed holiday to Ladakh, met friends over wine and good food. Inspired by fitness-obsessed Australia, I even gifted myself a Fitbit.

A little strip in a little bathroom confirmed in three little seconds that I would have a little one soon. All of a sudden I began to consider known facts in a new way. Could I have tea? Are mushrooms okay for lunch? I was tempted to break the news to my husband in person to truly enjoy the moment together. But I had another few days in Sydney followed by a business stopover in Hong Kong. And surely this couldn’t wait? I was wary of calling him at work and listening to his usual officious tone. Maybe I could wait till he’s back home to break the news? The time difference hardly mattered because I could barely sleep with excitement. But I just HAD to hear his voice and yet, give myself the option of not sharing this news over the phone. So I found a novel solution. I decided to Face-time him in a face mask! He quizzed me about why I chose a video call when clearly a hydrating mask was more important. The pretense didn’t last and I told him. His response was that I must have had one too many glasses of wine and that I should take the test again in the morning.

I braved the next few days in Hong Kong. It was very difficult to lie to my friends and attend my business meetings. Passing on the glass of wine is a tell-tale sign in today’s times so I would priggishly order a mocktail that could pass off as a Cosmopolitan. I landed in Mumbai on June 1st 2016 and headed straight to my gynecologist who confirmed that  I was six weeks pregnant. On June 2nd, I gifted the scan report to my parents as their 49th wedding anniversary present.

Over the next few  months I enthusiastically committed myself to project Pregnancy. Our baby boy was born on January 5th, 2017. Perfect in every way. Never before have I loved anyone so intensely, deeply and completely. It gives me an extraordinary sense of purpose each morning. Motherhood means there are so many unaccounted hours in the day but it’s in those hours that I find everything. The purest joy. The finest moments of my life as he coos and babbles. The little one lords over the daily chores and I’m at his service. 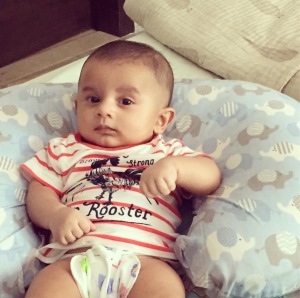 That said, I try to reclaim myself from time to time. Snatching some time to think, read, exercise, shop and write. All in an attempt to remind myself of who I once was. Not the individualistic, self-gratifying nature of singledom which is now a distant memory. But a more realistic endeavor in which I remind myself that I perhaps can’t go back to my old self but to become a newer version of myself. 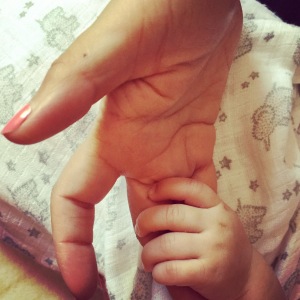 Last week as I sat slumped in my chair exhausted with the effort of love that is feeding, I got a phone call from the paediatrician’s clinic to confirm our appointment. “Is this Neev’s mom?” asked the receptionist. I was caught off-guard. And just like that I had a new identity. But this time someone belonged to me.

“Yes”, I said, sitting up a little straighter.